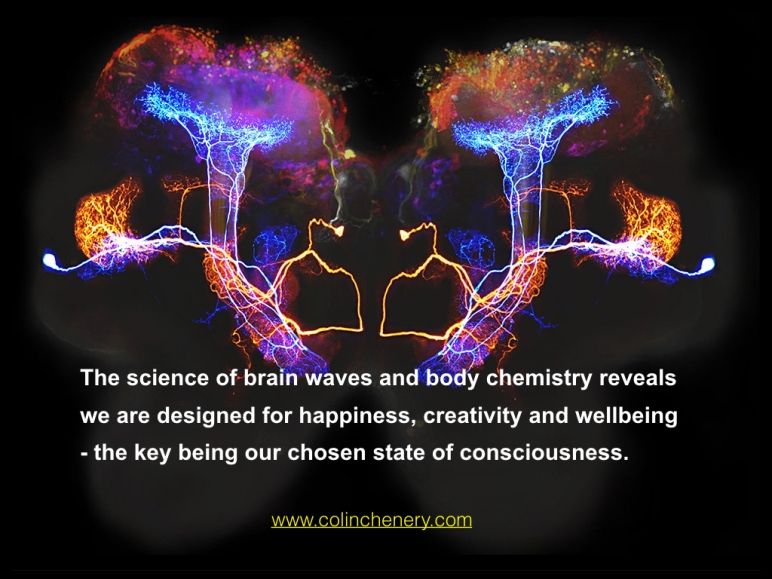 Anyone skeptical or neglectful of actively deepening their state of consciousness, and anyone not sure if it is for them, can be assured by current science that our bodies are hard wired and electro-chemically designed to be at optimum health and wellbeing at specific levels or frequencies of consciousness that can be measured and defined. The good news is, this information and available techniques make it easier and clearer than ever to harmonise mind and body at optimum levels of wellbeing and performance. Qualitative and meaningful aspects of specific conscious states can also connect us to timeless and universal loving awareness.

Starting with some basics – our brain produces different brainwaves based on our mood and state of mind during the day. They can be measured using an EEG machine. 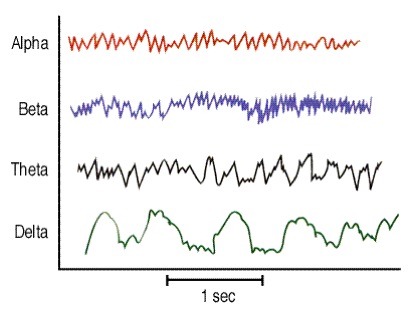 Narij Naik, M.Pharm in his blog “The Benefits of Getting More Alpha Waves!” (http://yang-sheng.com?p=5123)

spells out a typical day for many people:

“You wake up suddenly out of deep sleep (Delta brainwaves) with a loud alarm. Almost immediately, you feel a sense of stress from the pressure of getting to work on time and facing the day ahead (Beta brainwaves).”

While creative thinking usually occurs in alpha states, beta states are activated by stress-related problem solving and doing tasks you don’t particularly like or do for unpleasant reasons.

“Then, you jumpstart your day by grabbing a caffeine-rich cup of coffee or tea. Caffeine actually suppresses alpha and theta brainwave activity, keeping you in beta for most of the day.

The heavy work load, constant stimulation of the day job and managing the household, means most people are forced into a beta state from the time they wake up in the morning right until they get to bed and fall into a deep sleep (Delta brainwaves) exhausted from the day….. So, unfortunately, this unnatural and hectic lifestyle means people are forced from delta into beta, then back into delta with little room for alpha and theta brainwave activity.”

Research has also shown that people with addictions have a relative absence of alpha waves. Beta states are characterised by much inner dialogue that people identify with, much of the content often habitual, repetitive and negative, accumulating into mental and physical disorders.

Naik further explains alpha states: “The Alpha brainwave state is actually considered the brain’s most normal functioning state. But, we seem to spend less and less time functioning in alpha. One consequence of this is the brain actually forgets how to produce alpha waves. This means we tend to feel more stressed and less able to cope with the strain stress induces on your health. So, the result is a greater chance of getting stress-related disorders and diseases. Anxiety and stress have a dramatic impact on lowering the strength of your immune system.

Generating more alpha waves makes you feel less anxious and more relaxed as the harmony between your mind and body is restored. Scientists have shown that highly creativity people like artists, actors and even entrepreneurs tend spend more of their time in alpha brainwave states. This is because creativity requires a surge of alpha brainwave activity.

Alpha states happen whenever you get that “aha” or “eureka” moment of a compelling new idea, which gives you the inspiration necessary to literally create something out of nothing. The brains of creative people tend get a burst of alpha activity when faced with a problem to solve. However, this does not happen for most people who are not creative. So, to become a more effective problem solver and creative thinker, you need to increase your alpha waves.

Scientists have also shown that this surge of alpha activity happens during peak performance. After studying the minds of professional basketball players, they found that an increased alpha brainwave activity occurs usually in the left side of the brain just before making a winning shot. Beginner basketball players on the other hand, did not show any alpha activity. More long-term studies showed that as players improved their game they started to produce more alpha waves, suggesting they are necessary for high-level, peak performance.”

Other associated benefits given by Naik are:

I will go further into the happy chemicals of the brain and body in another blog.

For those who feel somewhat intimidated by meditation, Christopher Bergland in his blog “The Athletes Way” (https://www.psychologytoday.com/blog/the-athletes-way) refers to Dan Harris from ABC News who wrote, “10% Happier” a No. 1 New York Times bestseller which demystifies meditation and illustrates why taking a few minutes every day observing your thinking can dramatically improve your life.

Harris strips meditation down to three key points for mindfulness:

Both of these systems have become very popular and continue to be well studied. Reduction in serum cortisol (related to stress), increase in happy hormones such as dopamine and serotonin are cultivated in these practices and correlated to alpha wave activation.

Bergland also refers to L-Theanine, the amino acid mood enhancer in green tea. “Studies have shown this substance can now be isolated and made into a supplement. It is a great natural booster of your natural alpha brain waves. Users experience a much more focused and alert mind, finding it easier to manage stress and get things done.” L-Theanine boosts natural production of the mood-enhancing neurotransmitter dopamine. Bergland takes L-Theanine and says it is a very effective remedy “for my fairly scattered mind!”

These can be effective ways to relax the nervous system and body deeply, activating alpha brain wave production.

Functioning in an awareness of being, as well as doing, characterises alpha states. Two principles in the four examples above for cultivating alpha waves is firstly to have a regular time and place where you can relax fully, be still, peaceful and awake. Secondly, because the mind can only focus fully on one thing at a time then having a single focus like the breath, a mantra or sound, an object to gaze at, or a slow synchronised movement to repeat will displace mental chatter with practice. To get full value, use this time to cut-off from mental and environmental disturbances.

In the next blog I will go into the benefits of alpha states to the immune and endocrine (hormone and neurotransmitter) systems to show how far reaching the benefits are to each and every cell in the body as well as the mind, and how the body literally reflects the ‘tone’ of our mind. Our conscious state is a driver for the mind and body mechanism to function optimally as a self-sustaining or self-perpetual living being and for us to experience qualitative well-being and happiness. We are designed to relax into the ‘I AM’ state where we can better embrace the good and the bad of life and access creative thinking and solutions. An optimised body chemistry balances and adapts better, with every cell receiving and participating in the energy frequency and chemical messages produced.

The whole process of mind/body/soul feedback is self perpetuating as it is health and life affirming when optimised. The pivotal point to optimise this self-sustaining cycle as we deal with the world and life, is mindful awareness. Deepening our wisdom by applying knowledge while also transcending it through awareness of being, nurturing our appreciation of truth, beauty and goodness develop the experiential quality of our conscious state.

As Ram Dass and Ekhart Tolle agree, (see https://www.youtube.com/watch?v=zPmgTJGPzlg) loving awareness in the present moment can re-define love as recognising and sensing oneness in another. In alpha and deeper theta states we can get past naming, judgement and narrative of the ego to experience the arising of this love and awareness. Love is not an emotion in its higher sense, but a soul recognition of shared consciousness. Qualitative loving awareness in a predominantly alpha state of consciousness better opens us to realising ‘the one’ in ourselves, thereby in others – the formless in living form. Awakening from the formless, is reflected in the form of body and mind.

Other Posts of Interest